If I didn’t know any better, I would have argued that Codemasters looked back at, and copied, the homework of their new corporate parent, Electronic Arts. F1 2021 reminds me of FIFA’s Alex Hunter story found in FIFAs 17 to 19. For the first time, the series normally known for masterful racing and little else feels much more rounded. F1 2021 feels like “a game” more than ever before. 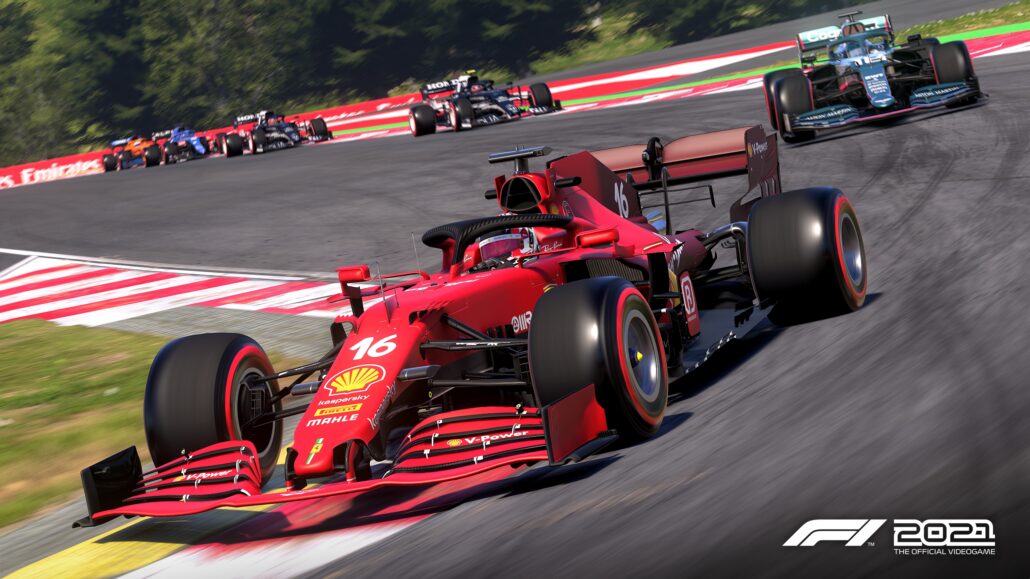 This isn’t a negative thing, nor is it meant to be a slight against older F1 titles. It isn’t much of a secret that I’ve had more than favourable impressions of F1 titles; these thoughts can be found in my previews (2019, 2020, 2021) and reviews (2017, 2019, 2020) of this and older titles. The thing here is that while Codemasters have undeniably perfected the art of creating an F1 racing game, their attempt in the past of creating a story within that game had fallen a little flat. Not this time.

Introducing Braking Point. Braking Point is constantly niggling me as I write this review; I keep calling it breaking point. Braking Point brings a story to F1 2021, teaming the young up-and-comer, Aidan Jackson, with the soon-to-retire veteran, Casper Akkerman. It’s a story we’ve all seen and heard before across so many mediums, but that’s because it works. It works here, too, with the return of Devon Butler from F1 2019 as the antagonist, the only truly successful part of Codemasters first attempt at a story.

Devon returns here with other early attempts made by Codemasters. The Braking Point story will take you across two seasons of the sport. The narrative and character development are primarily driven through cutscenes showing the politics and the ups and downs within the paddocks. It’s actually all quite grounded and believable, pushed forward by great writing that makes the characters act like us humans. There’s no doubt that it’s inspired by the Drive to Survive series on Netflix; Codemasters told me that themselves, but this is more grounded and certainly more age-friendly, for obvious (rating) reasons.

As for the actual racing within Braking Point, it’s another expansion on something that F1 2019 offered. This isn’t a traditional season where you’re simply trying to race and win every race across two seasons. Well, it is, you want to win, but it’s all about challenges you face within your career and how you react and deal with them. From mid-race situations like a puncture or mechanical failure and your reaction and recovery to pushing to finish ahead of a specific rider (looking at you, Devon) or a specific team, each goal and your success or failure in completing them are woven into the story through the cutscenes or post-race phone calls.

So while Braking Point may not be a pure career more in the usual sense of the word, it is a good launching point for the rest of F1 2021. You’ll get used to the cars, get used to different functions, settings and actions within the game, reading for you to use them in the rest of the game. The rest of the game, well, this is pretty much the F1 we all know and love, and it’s not much I haven’t already talked about in my preview of F1 2021 or reviews of older F1 games. Still, let’s give it a go because there are a few improvements.

Outside of Braking Point, you’ll find the return of career mode with the addition of a new two-player career option. My Team also makes its return. You can also make your own GP or jump in and have a singular race. There are online options, and, as with almost every game, I dipped my toe in and quickly abandoned it. The simple reason is that playing this before release makes it difficult to play online. It also made it difficult to try the two-player career mode, though I can give you general overviews of both before we get to the meat of the rest of F1 2021.

The two-player career does exactly what it says on the tin. It’s a career mode for two players. Do you race together on the same team, or do you race against each other on opposite teams? I don’t know, that’s for you to decide. If you choose the former, then when you move teams, you both move. Everything seems to work the same as a regular career here, from R&D to contracts and more. It’s all done online, no split-screening, but that’s hardly unexpected in this day and age.

As for the other online option, racing, it works as smoothly as expected, your enjoyment of the game sadly being bound to the number of players you can find and how those players act. Granted, this isn’t too bad of an issue when you’re racing against other reviewers and developers who happen to be playing the game at the same time as you. The network feels solid; the game runs great. It’s what we’ve all come to expect as Codemasters have finely tuned their work. 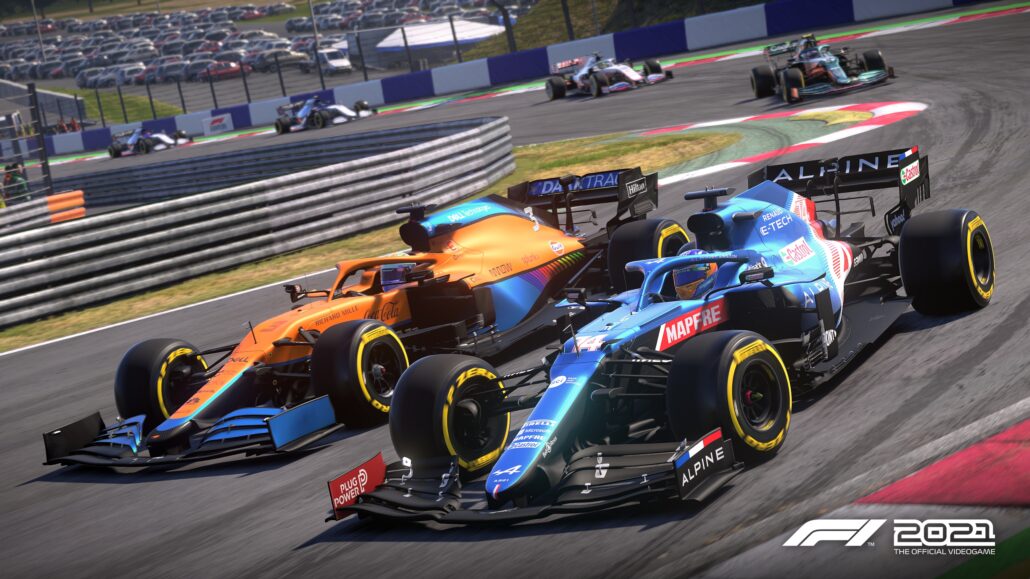 That’s what you can say about F1 2021. It’s finely tuned, and a clear halfway point ready for F1 2022, which will be the first “next-gen” F1 title. The racing is as flexible as ever, giving you as many driver aids as needed to fine-tune the game to your particular skill level. The AI, physics, everything has been – and I have to repeat it – finely tuned. It’s Codemasters at their best, even if their best has still been watered down recently by the inclusion of the “podium pass”.

Yes, this is still finding that balance between pure sim and arcade, and it isn’t quite on the same level as your Project Cars or rFactor, but it’s close enough while still not being prohibitive to useless scrubs like me. It’s also more favourable to those who don’t have the time to do every single practice and qualifying session or those who don’t want to. Rather than skipping them, you can simulate them. While you may not get the position you’d get if you were driving, it’s better than skipping, which would put you dead last.

Other changes and features include a revamped R&D system, which highlights areas of upgrading even better. This can also be automated, as can facility building, but I wouldn’t recommend that if you want to have any money for anything more expensive than a sandwich. The on-track AI may be decent, but behind the scenes is still lacking any tactical nuance.

As for the on-track changes, a lot of it is about the feel of the race and bringing it closer to the real thing. If you’re paying attention, you shouldn’t be caught out with the weather as it now comes at you in a very realistic fashion. Look at the horizon; you can see what’s coming. Cars will feature more realistic malfunctions, and the other drivers will also find themselves with the same issues that you can also find. Even off-screen, the race is simulated more realistically, making you more likely to see the safety car than ever before. 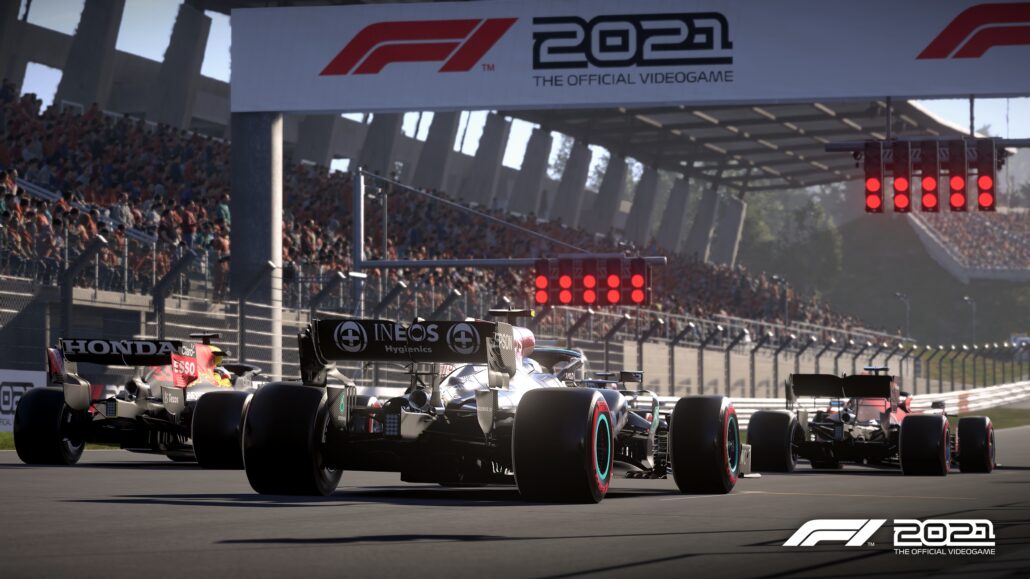 It’s genuinely hard for me to think of anything negative beyond my complaints of the microtransactions and the two-tier launch date nonsense. If I have any issues, the MyTeam mode shows the cutscenes’ age and that none were developed specifically for it. Compared to Braking Point, MyTeam doesn’t feel like the story of your team, or at least it doesn’t feel as engaging. I should say, though, aspects have improved by putting more detail into the riders’ stats.

On another positive, and it’s just trite to say it, and I’m throwing it in because it’s so obvious now, F1 2021 looks and sounds brilliant. That’s about all I can say. Visually, it’s fantastic. Even on lower settings, should you need to turn them down, you’ll get a decent looking game. Crank them up; it’s splendid. Codemasters have plainly been hanging around some F1 cars for the audio because it’s down to a tee, even when the cars start having a few niggles. If there are any issues, some characters can have a slight uncanny valley effect, but this is still showing progression on that front.

So is F1 2021 worth it? Well, yeah. It’s the same as practically every F1 game in the past five years. The refinements start to show, and the inclusion of a brand new mode, one that Codemasters tried but didn’t quite get right a few years back, shows the direction the F1 game series can go. As the last of the generation and the transition, there’s a lot to look forward to from the F1 series, so long as EA can leave it well enough alone and let Codemasters do what they do best.

F1 2021 has undeniably struggled with COVID and the limitations it has put on both the sport and the game. However, either despite or because of these limitations, this manages a step forward that the series failed to take two years ago, it brings a genuine story to the game. Braking Point is an undeniable success and, one would hope, marks a starting point in which Codemasters can advance as the series moves forward. Beyond this new mode, almost every aspect has been polished to a diamond-like shine, with the only aspects needing improvement are the MyTeam mode, which already looks lacking as a story of progression when compared to Braking Point, and the poor AI in team management. Despite this minor issue, there’s no doubt in my mind that this is the best of the franchise so far and a great launching point to the next generation.

Guilty Gear Strive Sold Over 500,000 Units Since Release; First DLC Character to be Revealed Next Week

Paramount+ And Showtime Are Now Available As A...