Microsoft Q2 Numbers Impressive, Thanks to Azure and a 51 Percent Increase in Xbox Revenue

Microsoft (NASDAQ:MSFT) has delivered their results for the quarter ending December 31, 2020, and it was another impressive three months for the company. Partially driven by the ongoing COVID-19 pandemic, Microsoft continued to see significant growth in both their Intelligent Cloud and Business Productivity sectors, and the launch of the Xbox Series X and S boosted the company’s gaming division to its biggest quarter-on-quarter increase in a very long time. With only a couple exceptions, namely Windows OEM and Surface sales, every aspect of the company’s business was up by double-digits in Q2.

Microsoft scooped up revenue of $43.1 billion and net income of $15.5 billion during Q2 2021, a respectable 17 percent year on year increase for revenue and a whopping 33 percent increase for income. Earnings per share were $2.03, which is above the $1.64 per share analysts were expecting and 34 percent up compared to the same period the previous year. As of the publishing of this article, Microsoft stock has spiked as high as 9 percentage points in after-hours trading. 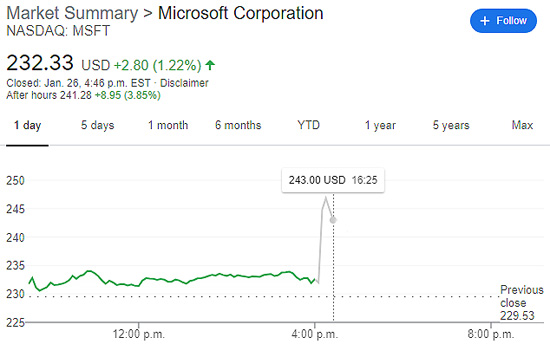 Microsoft is You Work from Home Hookup

Microsoft’s impressive Q2 results mostly come courtesy of the usual subjects, namely business productivity services like Office 365 and Dynamics 365, as well as the ever-growing Intelligent Cloud division, as widespread working from home continues to be a pandemic reality. Azure usage drove Intelligent Cloud revenue to $14.6 billion, a year-on-year increase of 23%. Naturally, products that help home-based teams communicate are booming, with Dynamics products being up 21%, driving the Productivity and Business Processes division revenue to $13.4 billion, up 13 percent compared to Q2 2020.

Xbox Series X and S Kick the Next Generation Off Right

The results from Microsoft’s Xbox division are arguably the most interesting aspect of the company’s most recent earnings report. Following a lengthy slump, the Xbox division has been on a slow rise thanks to the success of Xbox Game Pass and a more robust first-party game calendar, and Q2 saw the release of the new Xbox Series X and S consoles. The next-gen console releases drove an 86 percent year-on-year increase in Xbox hardware sales and an overall 51 percent increase in gaming revenue. It wasn’t just consoles selling either, as Xbox services and content revenue, driven by Xbox Game Pass, also increased 40 percent compared to Q2 2020.

So, while Microsoft wasn’t able to beat out rivals Sony or Nintendo this past holiday season in terms of units sold, the Xbox Series X and S are clearly off to a strong start, and it bears mentioning that both consoles have been severely supply-constrained. The Xbox division’s fortunes should only improve as Microsoft manages to get more consoles on shelves and lockdowns end, allowing people to actually buy them.

Microsoft’s New Ad Takes a Dig at Apple; Says the Surface Pro 7 Is Better Than a MacBook Pro, in Power, Design & More

As I’ve said in the past, Microsoft is particularly well-prepared to weather the current COVID-19 storm, but they aren’t resting on their laurels. With the launch of the Xbox Series X/S and pushing of Game Pass they’ve also begun shoring up one of their weaker divisions. Perhaps a similar push is also coming for other soft spots like Surface? Needless to say, Microsoft CEO Satya Nadella is happy about how the company is striding into the “second wave of digital transformation”…

What we have witnessed over the past year is the dawn of a second wave of digital transformation sweeping every company and every industry. Building their own digital capability is the new currency driving every organization’s resilience and growth. Microsoft is powering this shift with the world’s largest and most comprehensive cloud platform.

Microsoft has ridden out the COVID-19 pandemic admirably, and they will emerge a stronger, more diversified company once the world returns to some semblance of normalcy. As always, Microsoft remains the definition of a safe bet.

New Renders Of iPhone SE 3 Based On iPhone 12 mini