Resident Evil Village is only a little under a month away, and Capcom has shared new info about the game’s titular location and a mysterious figure at the heart of it all. The map is very stylized, but nevertheless provides a general idea of the layout of Resident Evil Village and some of the points of interest you’ll encounter (click the image for full resolution). 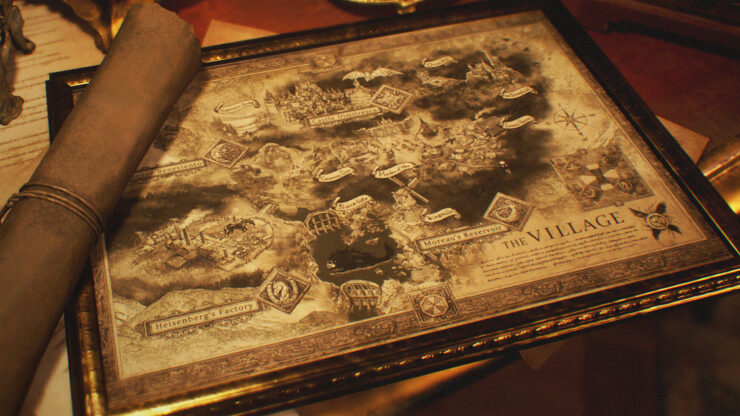 PS5 Is an Amazing Fit for Horror, Its Tech Contributes Hugely to Immersion, Says RE Village Director

So, it seems Resident Evil Village will feature four main locations, with Castle Dimitrescu from the demo being just one of them – players will also be visiting House Beneviento, Heisenberg’s Factory, and Moreau’s Reservoir. These locations will be connected by the Village itself, which contains its own mysterious sights to see, such as the Maiden of War, Cemetery, Luiza’s House, Suspension Bridge, and more. While perhaps not quite a full open world, it looks like players will have a sizeable map to explore.

Capcom has also revealed first details about “Mother Miranda,” a character we’ve previously heard Lady Dimitrescu refer to by name. It seems Miranda is a bit of a big deal, with villagers worshipping her as a god of sorts. Capcom has revealed two partial looks at Mother Miranda (she’s the masked face in the background of the new RE Village key art). Check them out, below.

So, is Mother Miranda the Resident Evil Village’s big baddie or perhaps something else? We’ll just have to find out for ourselves says Village director Morimasa Sato…

For Mother Miranda, I think it’s better for the players to find out for themselves by playing the game, but I’ll say this — Mother Miranda and the inner side of her character are extremely important factors in the game. [Her] mask resembles a crow’s beak. […] As a symbol of horror, crows function as a theme for Village in its entirety as well, and they appear in the actual game. Since she has a symbolic role within the village, we implemented that same design theme for Mother Miranda.

The Best Device for Apple’s Hi-Fi Music Is...