Streets of Rage 4 Review – A Beautiful Brawl Down Memory Lane

During the 1990s, the beat ‘em up ruled the roost, and Sega’s Streets of Rage series was quite possibly the best of the bunch. Sure, you could make arguments for Final Fight, Golden Axe, or even the Ninja Turtles, but few other 16-bit brawlers were as good looking and sounding, or as downright cool, as the original Streets of Rage trilogy. Unfortunately, the beat ‘em up genre fell out of favor in the late 90s and Streets of Rage was allowed to fade away…until now.

Yes, it’s been 25 years, but Streets of Rage 4 is finally here. Created by the team behind Wonder Boy: The Dragon’s Trap at Dotemu and Lizardcube, as well as Streets of Fury developer Guard Crush Games, Streets of Rage 4 updates the series’ classic hard-hitting action with beautiful new hand-drawn visuals and modern features like online play. So, is this series primed for a comeback or are its glory days too far gone? Tape up those fists, it’s time to find out… 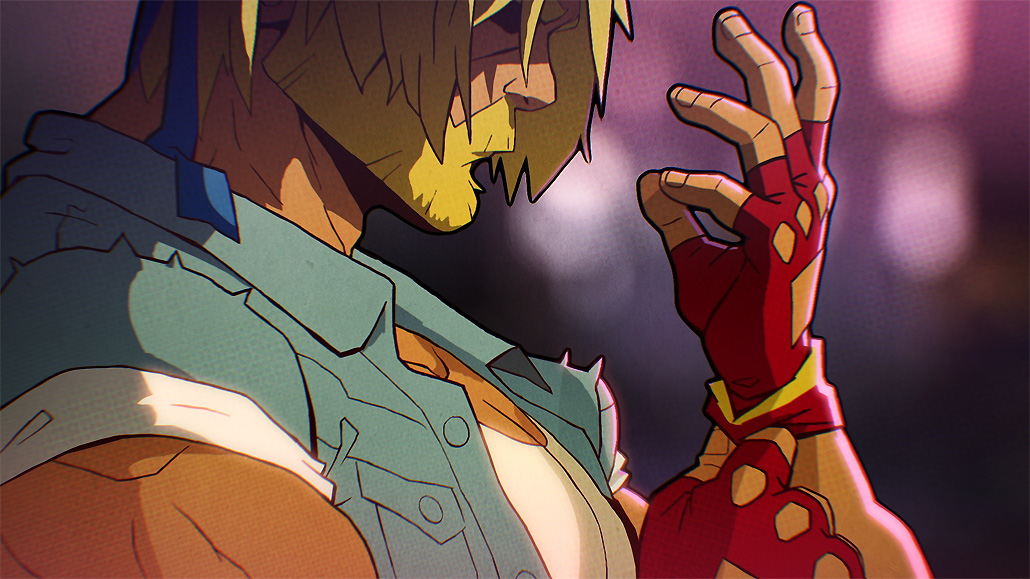 Streets of Rage 4 takes place 10 years after the events of the last game in the series, but aside from Axel growing a dad beard and bod, not all that much has changed. Blaze and Adam haven’t aged a day, and the streets are still awash in neon and spandex. As best I can tell, the time jump only exists so the game can introduce a younger generation of characters, including Adam’s daughter Cherry and Mr. X’s villainous offspring, Mr. and Ms. Y. If you’re expecting a complex plot, well…forget about it. The Y twins have taken over Wood Oak City’s underworld and police force, and it’s up to you to set things right by punching a whole lot of people in the face. That’s really all there is to it, but hey, who plays a beat ‘em up for its plot? The story provides a few fun action-movie moments and a steady stream of classic hero and villain cameos (Max, Shiva, Barbon, and more show up) and that’s all it needs to do. 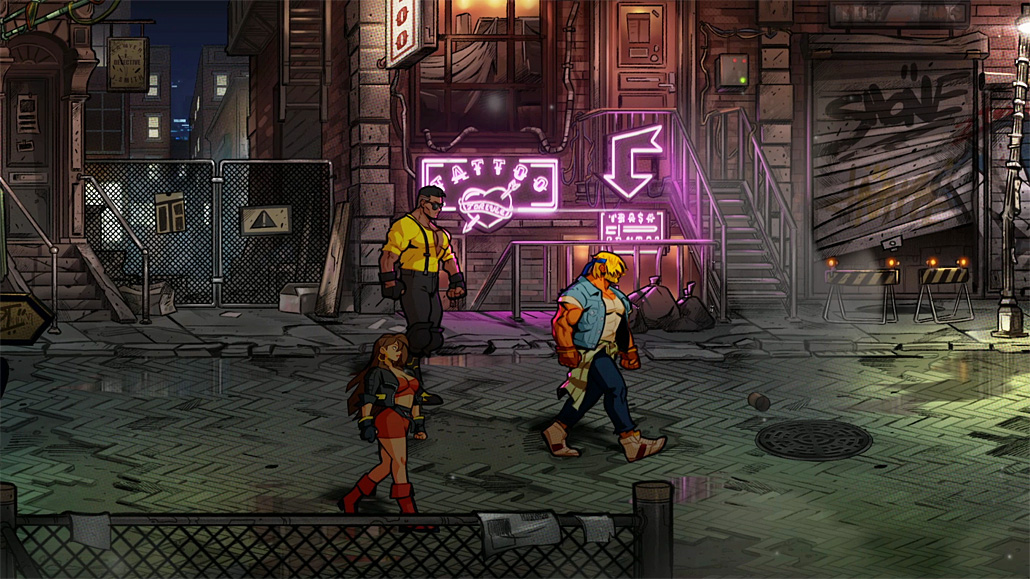 When you boot up Streets of Rage 4, you’ll probably spend most of your first play session marveling at just how fantastic the game looks. Lizardcube did some very nice work on Wonder Boy, but they’ve taken their character animation skills to the next level with this project. The motion of each character feels totally unique to them – Axel has this great weight to his movements, Adam oozes cool, and Blaze, well, everything about Blaze is gorgeous. Every level in the game feels unique, with players battling through grungy back alleys, a modern art gallery, the bustling streets of Chinatown, a gleaming high-rise, and many more locations. The references to Streets of Rage history are layered on thick, with familiar enemies, locations, and a million clever Easter eggs popping up one after another. The amount of love that’s been poured into every single screen of Streets of Rage 4 is truly impressive.

The original Streets of Rage games were well-known for their rockin’ tunes, and this new game largely lives up to that legacy. Primarily the work of Olivier Deriviere (Assassin’s Creed IV, A Plague Tale: Innocence) with some contributions from original series composers Yuzo Koshiro and Motohiro Kawashima, Streets of Rage 4’s soundtrack lacks that gritty, metallic Genesis edge, but most of the new songs complement the action nicely. Admittedly, some of the characters’ new voices may be a bit jarring at first, but you’ll get used to them quickly (even if you never stop groaning at their one-liners). 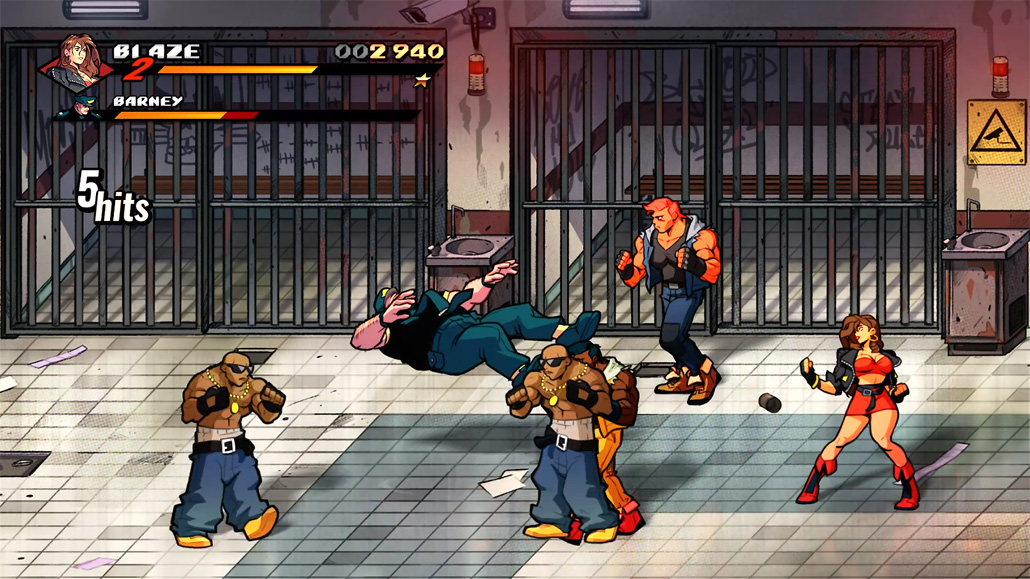 Of course, it doesn’t matter how great a game looks and sounds if it doesn’t play well, but thankfully, Streets of Rage 4 has that base covered as well. The basics haven’t changed much – you move from left to right, pummel thugs, eat turkeys out of garbage cans, and throw down against challenging bosses. Level design is as varied as you can expect from a game like this, with each basic enemy type and boss requiring different strategies, and most stages having their own unique traps and hazards. There are occasional moments where the game feels old school to a fault, as it can be difficult to line yourself up with enemies properly at times and annoying life-draining pits still show up on some levels. Ultimately though, these issues aren’t that big a deal given how good Streets of Rage 4’s combat feels. 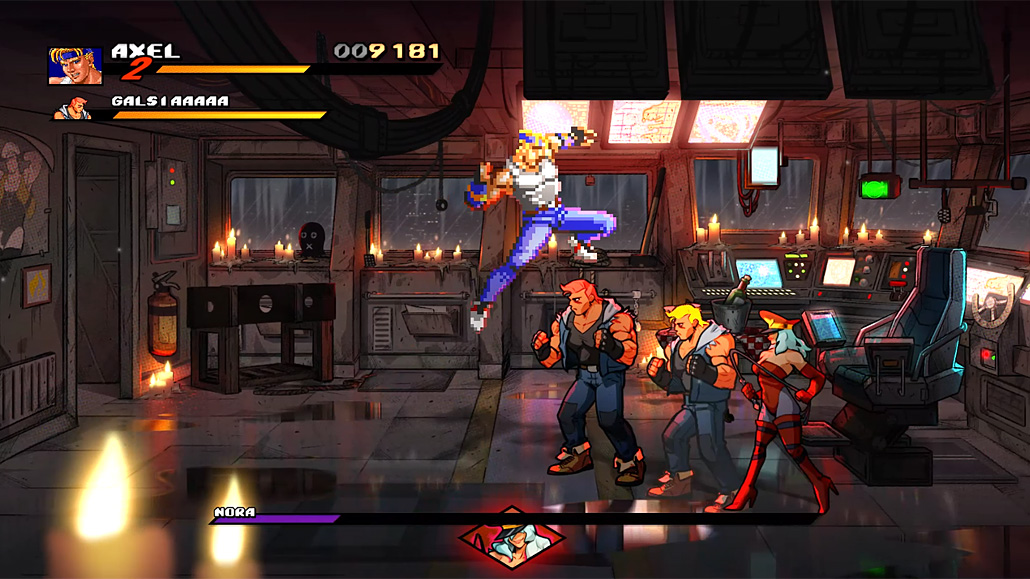 Once again, the basics of fighting will be familiar if you’ve ever played a Streets of Rage game before. You have a single attack button, which you can mash for simple combos, a throw, a jumping strike, a blitz move you can rush opponents with, and a powerful screen-clearing attack you gain by collecting hidden star powerups (each character has their own one of these now). Special moves, which can send pretty any enemy or boss sprawling, also return, although their mechanics have been tweaked a bit. Unleashing a special will drain some of your life as in Streets of Rage 2, but now you can earn that life back if you’re able to extend your combo without taking damage. It’s a smart risk-reward system that makes specials a much more integral part of the game.

Streets of Rage 4’s combat is perhaps a touch slower than some past entries in the series, particularly SoR3, as most characters can no longer dash around the stage freely (Adam being the exception), but overall, the action feels more fluid and satisfying than ever. Streets of Rage 4’s mechanics are simple and accessible, with additional assists available to those who struggle with action games, but there’s also a surprising amount of depth on offer here. Each character’s limited moveset can be used to chain together some pretty complex combos (check out Guard Crush Games’ Twitter account for some impressive examples) and the game’s higher difficulty settings will put your skills to the test. 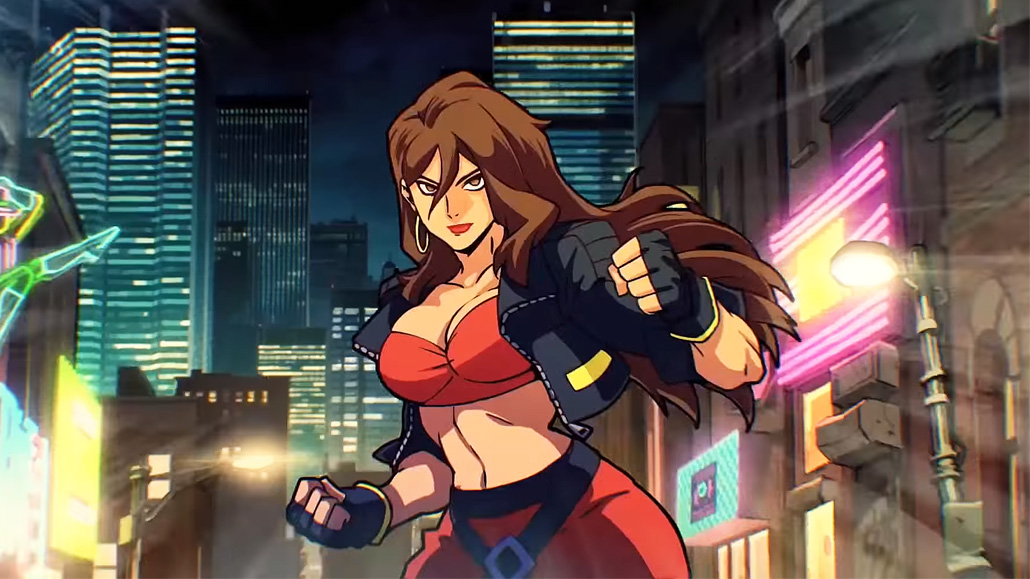 You’ll definitely want to try Streets of Rage 4 on multiple difficulty settings, as it doesn’t take very long to play the game through once. While not quite as abrupt as the original Genesis titles, you’ll likely complete this game’s 12 stages in around two or three hours. That may sound brief, but Streets of Rage 4 only costs $25 and offers a surprising amount of replay. I actually had more fun chasing high scores and seeing how far I could get in Arcade Mode (which takes away saves and extra lives) than I did playing through the game the first time. Of course, beat ‘em ups are always better with friends, and Streets of Rage 4 includes both co-op and competitive multiplayer for 2 players online or 4 players locally, making it a great, light, pick-up-and-play option. This is the rare game that really comes alive the more your revisit it, so go ahead and master it like a 90s kid who only got one game for Christmas.

This review was based on a PC copy of Streets of Rage 4 provided by publisher Dotemu. The game is available to pre-order on Steam now.

Streets of Rage 4 doesn’t reinvent the wheel, but honestly, that’s okay. The game’s dazzling visuals, silky-smooth action, varied level design, and sexy sense of cool more than make up for a few minor old-school irritations. Veteran Bare Knuckle brawlers will get the most out of Streets of Rage 4, but it should provide a satisfying thumb workout for players from all eras.

The Best iPad Cases for Kids –

How To Beat The Final Boss In Kena:...

Android is getting great new features in upcoming...

How To Beat Corrupt Toshi In Kena: Bridge...